The corona pandemic has led to a great need for information among many people. Not only TV stations and digital media can profit from this, also many print media are enjoying growing popularity again in these uncertain times. According to the latest IVW figures (Q4/2020), titles such as Die Zeit and Handelsblatt are enjoying increasing subscription figures, mainly thanks to the e-paper.

Die Zeit can once again announce brilliant figures. With a paid circulation of 547,390 copies, the Hamburg-based weekly cannot only report a big increase of 8.6%, but also the third record circulation in a row. This is particularly pleasing for the editorial team around editor-in-chief Giovanni di Lorenzo. The subscription circulation increased by no less than 17% to a new record of 412,754 copies. More than every fourth subscription (125,757) is now an e-paper. But single copy sales also rose by 6.5% to over 66,000 copies.

Most other newspapers can only dream of such figures but there are other positive examples apart from Die Zeit. Handelsblatt too was able to increase its subscription circulation, by no less than 2% to 86,878 copies of which more than 60,000 are e-papers. Since the inflight copies almost completely collapsed as a result of the corona pandemic, the bottom line is a small minus of 0.5% and a paid circulation of 134,191 copies. 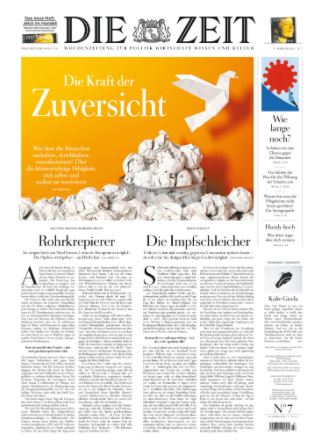